Labor of Love Charities - Sunday in the Park 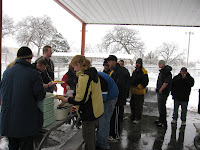 I've been telling you about my son Anthony and his non-profit organization, Labor of Love Charities (LOL). It's an organization he started for the homeless in Shawnee, Oklahoma 11 months ago. I am simply amazed at the progress this organization has made in such a short time.

Last weekend was supposed to be LOL's first annual charity dinner, dance and auction fundraiser. My other two children (Joey and Brianna) and I made the 3 hour drive to Shawnee to attend, but unfortunately, it was rescheduled due to some crazy winter weather they were having there. Oklahoma ended up getting 10 inches of snow, ice build up on the roads and thousands of homes and businesses lost their power.

Anyway, the dinner was the only thing that the charity canceled. Every Sunday at 2:00 p.m., Anthony and his volunteers feed the homeless at one of the local parks. This Sunday was no exception. Like the postman, people can count on being fed when Anthony is around no matter what the weather is like. 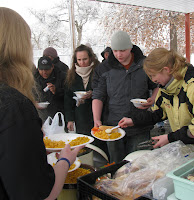 Sunday's lunch - albeit a simple one of macaroni and cheese, buttered corn, hot dogs and buns, hot cocoa, bottled water and slats of pastries donated by the local Starbucks - served as the meal on this very cold day.

When we arrived at the park, several homeless people were there waiting for us. Meals were served up in big styrofoam containers. There was plenty of food for everyone; those who wanted seconds were able to take extra food with them. I was amazed to find out from ou 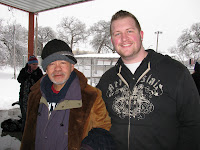 r homeless friends that several of the places where they go for food weren't serving meals on that freezing cold day due to the winter weather. Anthony told me that's a common occurrence - many organizations will only serve the homeless when the weather is nice. Anyway, one of the homeless said, "We KNEW you'd be here, Anthony." And because of that, they trudged to the park in ankle deep snow to get what proved to be their only meal for the day.

Posted by Wanda Maria Designs at 7:47 AM

What an absolutely heartwarming post. You must be so proud of your son. A huge well done to him and all the volunteers for battling the weather
xx

It's so nice to read about the good things that go on in this world. Thanks for sharing. 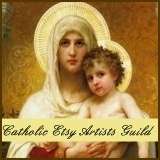